A court just reinstated DACA, but the decision has bad news for Biden 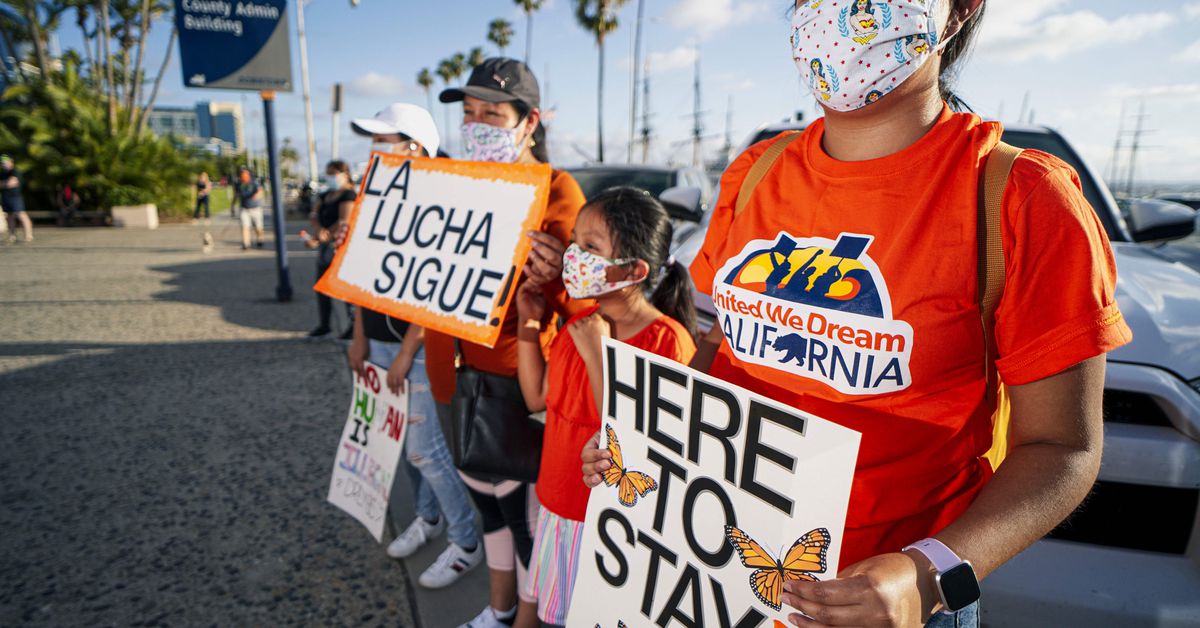 Late Friday afternoon, a federal district judge ordered the Trump administration to fully reinstate the Deferred Action for Childhood Arrivals (DACA) program, which allows nearly 700,000 undocumented immigrants who came to the United States as children to live and work there.

The case is Batalla Vidal v. Wolf. Judge Nicholas Garaufis, who handed down the order, said the Department of Homeland Security (DHS) must “post a public notice, within 3 calendar days of this Order . . . that it is accepting first-time requests for consideration of deferred action under DACA” because the department’s ostensible leader tried to limit the DACA program without having the authority to do so.

The ruling is the latest blow in the Trump administration’s attempts to end the program. In 2017, Trump’s DHS issued a memo that sought to wind down the DACA program, but the Supreme Court ruled last June that DHS’s initial attempts to end it were void because the department did not adequately explain why it was doing so.

Rather than fully reinstating DACA following the Supreme Court’s order, however, DHS issued a new memo in July signed by Undersecretary of Homeland Security for Strategy, Policy, and Plans Chad Wolf — and the lawfulness of this July memo was the central issue in Batalla Vidal. “I have concluded that the DACA policy, at a minimum, presents serious policy concerns that may warrant its full rescission,” Wolf wrote in that memo.

The memo directs “DHS personnel to take all appropriate actions to reject all pending and future initial requests for DACA,” and it provides that current DACA beneficiaries may only receive one-year renewals of their DACA status, rather than the two year extensions they would have received prior to this memo.

Judge Garaufis ruled in mid-November that Wolf “was not lawfully serving as Acting Secretary of Homeland Security under the Homeland Security Act (‘HSA’) when he issued the July 28, 2020 memorandum,” thereby cutting the legs out from under Wolf’s attempt to water down the DACA program. If Wolf is not the acting secretary, then his July memo is void.

The order Garaufis handed down on Friday lays out some of the consequences of the judge’s mid-November decision. “Because Mr. Wolf was without lawful authority to serve as Acting Secretary of OHS, the Wolf Memorandum is VACATED,” Garaufis wrote in his most recent order.

So the good news for DACA-eligible immigrants is that, barring a decision from a higher court blocking Garaufis’s most recent order, those immigrants will soon be able to obtain DACA status. And even if the order is blocked, President-elect Joe Biden has also pledged to fully reinstate DACA once he takes office on January 20.

Nevertheless, the future of DACA remains uncertain. For one thing, the Supreme Court’s June decision blocking the Trump administration’s initial attempts to end the program was a 5-4 decision, with the late Justice Ruth Bader Ginsburg in the majority. Since then, Trump has replaced Ginsburg with the far more conservative Justice Amy Coney Barrett. And even before Barrett arrived at the Supreme Court, several members of the Court had signaled that they thought DACA is illegal.

So there’s a reasonable likelihood that the Court’s 6-3 Republican majority will strike down the DACA program even as Biden tries to preserve it.

The logic of Garaufis’s November opinion — that presidents have only limited authority to make acting appointments — could also come back to bite Biden, especially if Republicans control the Senate and, with it, the power to block Biden’s nominees.

Chad Wolf is not the acting Secretary of Homeland Security

The core issue in the Batalla Vidal case turns on whether Wolf was lawfully appointed acting secretary, and therefore is empowered to make changes to the DACA program.

Garaufis’s opinion holding that Wolf was not lawfully appointed is fairly straightforward. The Homeland Security Act provides that, if DHS’s top job becomes vacant, the deputy secretary shall act as secretary. If both jobs are vacant, then “the Under Secretary for Management shall serve as the Acting Secretary if by reason of absence, disability, or vacancy in office, neither the Secretary nor Deputy Secretary is available to exercise the duties of the Office of the Secretary.” A sitting secretary, moreover, “may designate such other officers of the Department in further order of succession to serve as Acting Secretary.”

Currently, DHS’s top ranks are a bit a of ghost town. All three of the top jobs are vacant. Kirstjen Nielsen, the last person to serve as a Senate-confirmed Secretary of Homeland Security, resigned in April of 2019. Before she left, however, she did lay out the order of succession that should apply if the top three jobs at DHS become vacant.

If all top three jobs were vacant, Nielsen determined, then the administrator of the Federal Emergency Management Agency should become secretary — but this job has been vacant since the spring of 2019. Next in line would the director of the Cybersecurity and Infrastructure Agency — a job that, until recently, was filled by Christopher Krebs.

Trump fired Krebs in mid-November after Krebs refuted false claims by Trump and some of Trump’s allies that Biden somehow stole the 2020 election. But Krebs still was in his job as head of the Cybersecurity and Infrastructure Agency in July, when Wolf handed down his DACA memo. That means that Krebs, not Wolf, should have been the acting secretary in July.

It’s worth noting that, even with Krebs out of the picture, Wolf still is not next in line to be acting secretary. After Krebs is the undersecretary for science and technology, but this position is vacant and the job is currently being done by a “Senior Official Performing the Duties of the Under Secretary for Science and Technology.” The next person in line after that is the undersecretary for intelligence and analysis, but that position is vacant as well, and the relevant office is held by an acting official. Eighth in line is the commissioner of US Customs and Border Protection, but that position is also vacant and there, too, the office is led by an acting official.

Ninth in line is the administrator of the Transportation Security Administration. The TSA actually does have a Senate-confirmed leader — David Pekoske was confirmed to lead the TSA in 2017 — and he still holds that office. So it would appear that Pekoske, not Wolf, should currently be serving as acting secretary of DHS.

As this litany of vacant offices and acting officers suggests, the courts have thus-far been fairly tolerant of President Trump’s attempts to bypass the Senate and fill top jobs with acting officials. But Judge Garaufis’s order suggests that that tolerance may be coming to an end just as Biden is preparing to take office.

We do not yet know who will control the Senate at the beginning of the Biden administration. Currently, Republicans hold a 50-48 seat majority in the incoming Senate, with two seats to be determined in a January 5 Georgia runoff election. If Democrats win both of those seats, Vice President-elect Kamala Harris’s tiebreaking vote will give them a narrow majority in the Senate.

But if Republicans prevail in either Georgia race, then Senate Majority Leader Mitch McConnell (R-KY) will continue to lead the Senate, and Republicans will have the power to block any Biden nominee to any Senate-confirmed job.

Biden, meanwhile, may find himself unable to staff his administration if Republicans choose to sabotage his presidency. While the Department of Homeland Security has a rigid order of succession for its top job, most agencies are governed by the Federal Vacancies Reform Act (FVRA) when a Senate-confirmed position becomes vacant.

Thus, if a vacancy arises in the middle of a presidency, that’s typically no big deal. After the first year of a new presidency, the president will normally have appointed hundreds of individuals to Senate-confirmed jobs. So that gives the president a deep bench of officials to slide into acting roles as they are needed.

But, at the beginning of Biden’s presidency, he won’t be able to rely on existing Senate-confirmed officials to serve as acting secretaries if the Senate refuses to confirm his nominees. With rare exceptions, the only people in Senate-confirmed jobs when Biden takes office will be Trump appointees.

Biden could potentially fill the vacant jobs with civil servants — that is, with senior career officials in the relevant agencies — but that could prevent Biden from naming a cabinet that shares his political and policy vision.

The FVRA, moreover, imposes rigid limits on just how long an individual may serve in an acting role. Under many circumstances, the tenure of an acting official is limited to just 210 days after a vacancy arises. So even though Biden could fill many jobs temporarily with civil servants, many of those acting appointments will expire just seven months into his presidency.

As mentioned above, the courts haven’t exactly been rigorous in enforcing these restrictions under President Trump, but they now seem likely to take a new interest in enforcing laws like the FVRA once Biden takes office. A 6-3 Republican Supreme Court is unlikely to bend the law in order to help a Democratic president — and really, the law is quite clear that Biden does not have a limitless power to make acting appointments.

A tremendous amount, in other words, is potentially at stake in the Georgia Senate runoffs. Those races could determine whether the Biden administration is able to perform many of the most basic functions of government — starting with actually getting people into top jobs within the administration.