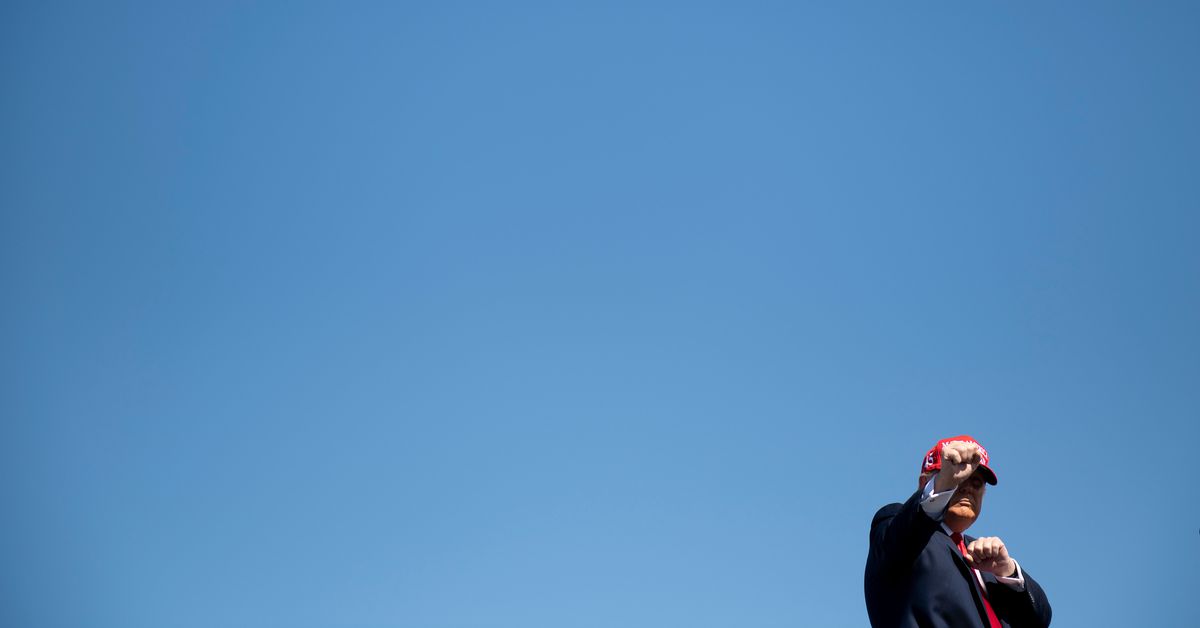 President Donald Trump battled members of his own party this weekend, as his critics — and even some allies — called upon him to accept the results of the presidential election.

Following his loss of a major lawsuit seeking to overturn Pennsylvania’s results on Saturday, several prominent Republican leaders gave interviews on Sunday suggesting that it was time for Trump to consider conceding.

Maryland Gov. Larry Hogan, who has been critical of Trump in the past, said on CNN’s State of the Union that Trump’s behavior has been embarrassing.

“We were the most respected country with respect to elections,” Hogan said. “And now, we’re beginning to look like we’re a banana republic. It’s time for them to stop the nonsense. It just gets more bizarre every single day.”

Also on State of the Union on Sunday, John Bolton — the former White House national security adviser who was ousted acrimoniously in September 2019 — called Trump’s behavior “inexcusable” and likened it to “throwing rocks through windows.”

“We need all of our leaders to come out and say, ‘The election is over,’” he said. “We’re not talking about an abstract right for Trump to use his legal remedies. We’ve passed that.”

Trump’s campaign team has given no indication that he plans to declare the election over, despite the fact that President-elect Joe Biden won the race more than two weeks ago. And Trump summed up his current stance on the matter Saturday, tweeting, “Hopefully the Courts and/or Legislatures will have the COURAGE to do what has to be done to maintain the integrity of our Elections, and the United States of America itself.”

But there is no legal basis for election results to be overturned. No widespread voting fraud has been revealed, and the president’s claims that there were improprieties with vote counting have been debunked as he has raised them. Some close states, like Georgia, recounted ballots by hand — and after doing so, found the recount did not alter the results.

Trump has made it clear that he will not accept this fact, and has attacked anyone — be they members of his party or not — who suggests he should.

Sunday, Trump took to Twitter to lash out at Hogan, who earned Trump’s ire earlier this year when he criticized the president’s handling of the Covid-19 pandemic, for his remarks on CNN.

Trump called Hogan a Republican-in-name-only, or RINO — a term he commonly uses for Republicans who disagree with him — and shared an article from the right-wing news site Breitbart suggesting that Hogan had fumbled his own coronavirus response.

Hogan responded on Twitter, and, referring to the fact the president has spent much of the weekend on his Virginia golf course, suggested Trump “Stop golfing and concede.”

If you had done your job, America’s governors wouldn’t have been forced to fend for themselves to find tests in the middle of a pandemic, as we successfully did in Maryland.

Trump lobbed the same insult at Georgia Secretary of State Brad Raffensperger on Friday, after he certified that Biden won the state, while also attacking Georgia’s Republican Gov. Brian Kemp.

“Georgia Secretary of State, a so-called Republican (RINO), won’t let the people checking the ballots see the signatures for fraud,” Trump tweeted Friday. “Everyone knows that we won the state. Where is @BrianKempGA?”

Attacks like these are hurting party unity — as Politico reports, some fear they could cost the GOP elections in the future by inviting primary challenges to candidates like Kemp and by encouraging further infighting.

At the moment, Trump seems disinclined to stop these attacks — but both Hogan and Bolton encouraged fellow Republicans to ignore them, and to join them in calling on Trump to accept the election results.

“The more who come out and say, ‘He doesn’t represent us — he is not following a Republican game plan here,’ the safer they will be,” said Bolton.

Few Republicans in office are speaking out against Trump

For the most part, it appears that GOP leaders aren’t heeding Bolton’s advice.

Sen. Lamar Alexander (R-LA), for instance, said it still only “looks like [Biden] has a very good chance” of being the next president. Rep. Jim Jordan (R-OH) has called for investigations into election irregularities that do not exist. Raffensperger claimed Sen. Lindsey Graham (R-SC) tried to pressure him into illegally discarding ballots. And congressional leaders have largely been silent; Senate Majority Leader Mitch McConnell, for instance, said recently that he believes that questions over the election will resolve themselves thanks to “the process” and “our system.”

However, following Trump’s loss in Pennsylvania Saturday, there was a slight shift in tone among certain allies.

That defeat was the most recent of several Trump has faced in his attempts to legally challenge the results of the presidential election. But it may have been the most resounding. As Vox’s Ian Millhiser has explained, the judge in that case, US District Court Judge Matthew Brann, “didn’t just reject the Trump campaign’s legal arguments, he mocked the campaign for its inability to present a coherent argument — or to provide any legal support whatsoever for crucial elements of their claims.”

“One might expect that when seeking such a startling outcome, a plaintiff would come formidably armed with compelling legal arguments and factual proof of rampant corruption,” Brann wrote in his decision. “That has not happened.”

As a result of that decision, retiring Pennsylvania Sen. Pat Toomey, a Republican, said on Saturday that “President Trump has exhausted all plausible legal options to challenge the result of the presidential race in Pennsylvania,” and congratulated Biden and Vice President-elect Kamala Harris on their victory.

Christie, however, stopped short of criticizing the president directly.

“I’ve been a supporter of the president. I voted for him twice, but elections have consequences, and we cannot continue to act as if something happened here that didn’t happen,” he said. “You have an obligation to present the evidence. The evidence has not been presented.”

When asked about Toomey’s statement on Meet the Press, Sen. Kevin Cramer (R-ND) attempted to thread the needle of calling for a transition of power to Biden while supporting Trump’s efforts to challenge those results.

“Everyone ought to just relax and let it play out in the legal way,” Cramer said, misleadingly adding that Trump is “just exercising his legal options.”

Cramer added, however, that there should eventually be an end to those challenges, and that it’s “past time” for the Biden transition to begin.

Cramer is correct that all Americans have the option of bringing lawsuits — but filing baseless ones like Trump’s is something not smiled upon by the court system. And efforts like Cramer’s to legitimize Trump’s actions ignore the reality that the clock is ticking on any scheme, legitimate or otherwise, to alter the election’s results.

Key states have begun the process of certifying their results. Georgia did so Friday, and as Michigan Rep. Fred Upton highlighted Sunday on CNN’s Inside Politics, Michigan is set to on Monday.

Upton noted that all Michigan counties had certified their results, and that its 154,000-vote margin in favor of Biden would stand.

“The voters have spoken,” he said. “No one has come up with any evidence of fraud or abuse. … Let the voters, not the politicians, speak.”

And legislators in the state have suggested that they have no plans to attempt to block or overturn that certification when it comes.

All this means that, whether it’s on December 8, the federal deadline for states to certify their results; on December 14, when the Electoral College votes; or on January 20, when Biden will be sworn in, Republicans will have to admit that Trump will not have a second term.

But Trump himself has not signaled when or if he will ever back down from challenging the election’s results. For now, a recount remains underway in Wisconsin, a second recount has been ordered in Georgia, and challenges in Arizona and Nevada are ongoing.