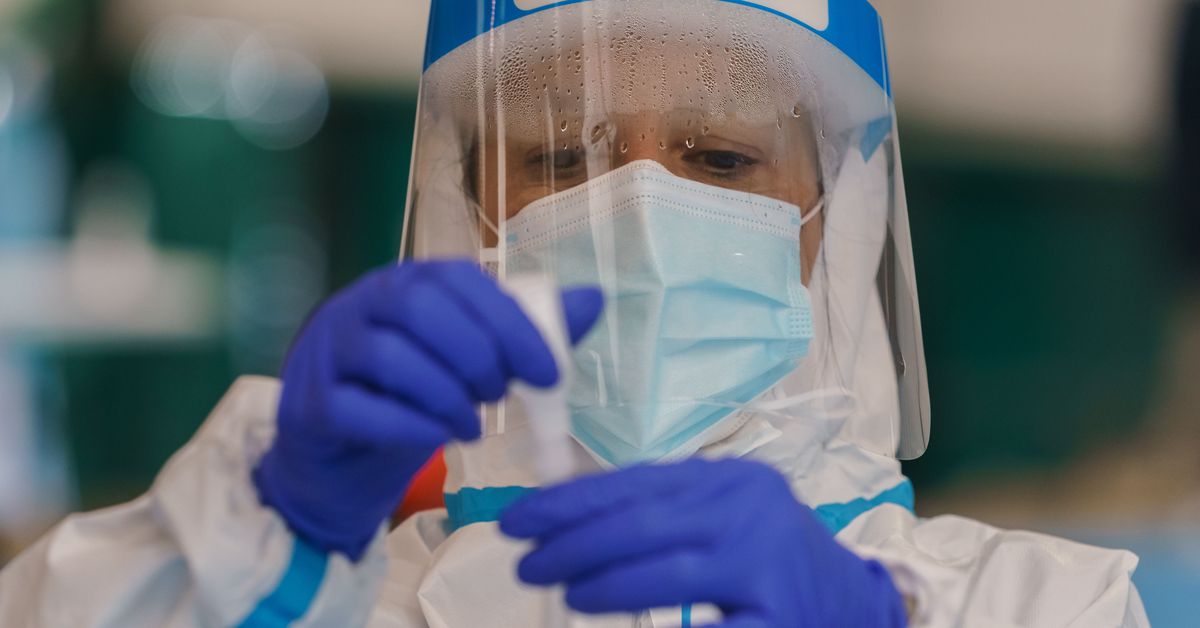 Amid record levels of new Covid-19 infections and hospitalizations, the Food and Drug Administration announced Saturday that it would allow emergency use of an antibody drug treatment known as REGN-COV2 that helps immune systems fight the virus.

The treatment, developed by the biotech company Regeneron, consists of two antibodies called casirivimab and imdevimab that have thus far shown promising results in reducing the severity of the coronavirus when given to patients who have not yet developed symptoms requiring hospitalization. Another similar treatment, made by drug giant Eli Lilly, was approved earlier this month.

The Regeneron treatment received widespread attention after it was used to treat President Donald Trump during his bout with the virus in October. In a video released on October 7, Trump claimed — without evidence — that the the treatment had cured him and said his administration was working on an emergency use authorization (EUA). Trump also appeared to claim, falsely, that he had already authorized it for use, even though he has no authority to authorize drugs.

At the time, some doctors and experts took to Twitter to question why the president’s doctors would give him a treatment not yet approved by the FDA. As Vox’s Julia Belluz explained, “Trump was only able to access the treatment through the FDA’s ‘compassionate use’ provision, whereby unapproved drugs are administered to seriously ill patients who have no other treatment options on a case-by-case basis.”

The drug cocktail’s new FDA approval means that it will be available for use to a wider number of people, including those who would not have qualified for compassionate use. And it comes following pressure from several Trump administration officials, including White House chief of staff Mark Meadows and presidential son-in-law Jared Kushner, who publicly pushed FDA Commissioner Dr. Stephen Hahn for quick agency reviews.

However, the treatment won’t be widely available immediately: According to Regeneron, the company will have enough of the drug for 80,000 people by the end of November, 200,000 by early January, and 300,000 by the end of January. A partnership with Swiss drug manufacturer Roche will allow for ramped up production after that.

Whether that will be enough doses to meet demand remains to be seen. The US is in the midst of a record breaking spate of cases, with more than 1 million new Covid-19 cases having been diagnosed in the past week. The records for most new confirmed cases in one day are being broken regularly, and hospitals are increasingly in danger of being overwhelmed.

The FDA has also recommended the cocktail be used only in certain circumstances. The agency says only those who are 12-years-old or above and are at increased risk for developing severe cases of Covid-19 should be given the treatment.

And according to Regeneron, the results of two trials show that the treatment works when given early on in a patient’s treatment process, before they have developed serious symptoms. The FDA also stated that the antibodies are not authorized for anyone who has become hospitalized or needs oxygen; Regeneron has said studies are continuing to better understand the treatment’s effects on hospitalized patients.

The company received more than $500 million from the US government for development of the treatment as part of the Trump administration’s Operation Warp Speed, and because of that funding, the first 300,000 doses are supposed to be provided free of cost. Patients will still be responsible for paying for administering the treatment — the antibodies are delivered via an IV, meaning the treatment will need to be done by medical professionals at hospitals or clinics.

The emergency approval comes as hype over two possible Covid vaccines have gotten a lot of attention recently. Pfizer, creator of one of the vaccines, said it wrapped up its clinical trial successfully, and submitted an application for emergency approval from the FDA on Friday, while another company, Moderna, said it would be applying soon. Health officials had hoped that antibody treatments like Regeneron’s would help address cases in the time before vaccines become widely available.

Regeneron’s antibody cocktail is just one of several of such experimental treatments for Covid-19. There’s also convalescent plasma, which is taken from people who were infected with the virus but later recovered, as Vox’s Umair Irfan explained:

Plasma is the liquid part of blood, including proteins used for clotting, and when harvested from convalescents, it contains antibodies to the virus. So transfusing plasma from someone who recovered to someone who is sick could help them get better, or prevent them from getting sick in the first place.

These treatments are still being investigated, including Regeneron’s REGN-COV2. As Irfan has explained:

The FDA can grant an EUA to allow unapproved medical products to treat or prevent serious diseases when there are no adequate alternatives on the market.

The benchmark for an EUA is lower than it is for full approval of licensure. In general, the treatment in question has to have a likely benefit, whereas approval demands evidence of a proven benefit.

In practice, this means the FDA isn’t completely sure Regeneron’s treatment works, but that it’s “reasonable to believe that casirivimab and imdevimab administered together may be effective in treating patients with mild or moderate COVID-19.” Ahead of submitting for its EUA, Regeneron said it planned to continue trials in that included a variety of hospitalized and nonhospitalized individuals.

At the moment, peer reviewed research hasn’t yet been published on Regeneron’s antibody treatment, so experts can only go by data presented in company press releases purporting to show the treatment works. The FDA believes it has seen enough to allow its use, however, giving doctors one more option to consider as cases rise.

Kamala Harris’s California Senate seat should be filled by a woman of color, say big donors