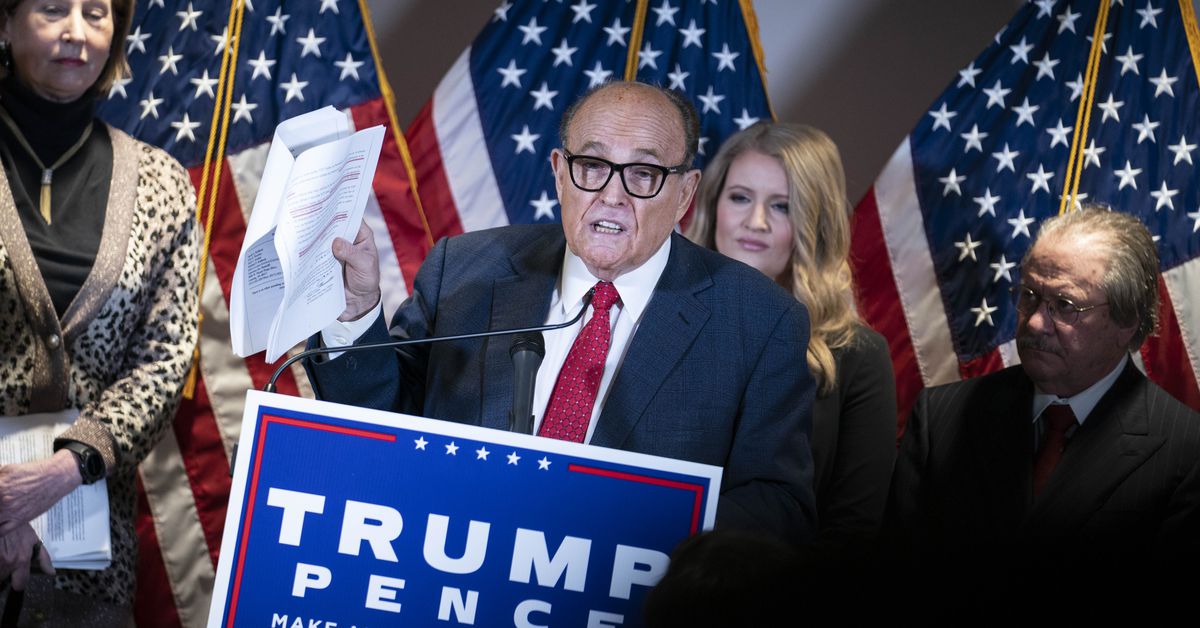 It was a disaster for Giuliani. The one-time mayor and senior federal prosecutor struggled to articulate what, exactly, was the basis of Trump’s legal claims. And he admitted that he was unfamiliar with basic legal terms such as “strict scrutiny,” one of the rudimentary vocabulary terms taught to every law student during their introduction to constitutional law.

On Saturday evening, Judge Matthew Brann released his opinion in this suit, Donald J. Trump for President v. Boockvar, and the judge did not pull punches. Brann didn’t just reject the Trump campaign’s legal arguments, he mocked the campaign for its inability to present a coherent argument — or to provide any legal support whatsoever for crucial elements on their claims.

Referring to the Trump campaign’s primary legal argument, Brann writes that “this claim, like Frankenstein’s Monster, has been haphazardly stitched together from two distinct theories in an attempt to avoid controlling precedent.” And that’s just one of many scathing lines from a judge who is clearly frustrated with the incompetent lawyering on display in his courtroom.

It’s worth noting that, while Brann was appointed to the federal bench by Democratic President Barack Obama, the judge held multiple leadership positions within the Republican Party. Obama frequently had to strike deals with Republican senators to appoint GOP judges, in order to prevent those senators from blocking Obama’s other nominees.

Indeed, one person who appears particularly impressed with Brann’s conservative street cred is Sen. Pat Toomey (R-PA), who released a statement shortly after Brann’s decision was handed down congratulating President-elect Biden and Vice President-elect Kamala Harris. “With today’s decision by Judge Matthew Brann, a longtime conservative Republican whom I know to be a fair and unbiased jurist, to dismiss the Trump campaign’s lawsuit,” Toomey said in his statement, “President Trump has exhausted all plausible legal options to challenge the result of the presidential race in Pennsylvania.”

Trump could potentially appeal Brann’s decision, and claims that he will. But, given the weakness of his campaign’s arguments, which Brann repeatedly points out, such an appeal is unlikely to prevail.

The Trump campaign’s main argument challenges an email that Pennsylvania Secretary of State Kathy Boockvar sent to county-level voting officials, encouraging those officials to “provide information to party and candidate representatives during the pre-canvass that identifies the voters whose ballots have been rejected,” so that those voters can be notified that they made an error while submitting those ballots, and will have the opportunity to cure that error.

As it turns out, not all counties took this advice. The Trump campaign claims that Philadelphia, a Democratic stronghold, notified voters that they needed to cure errors in their absentee ballots, while county officials in Republican-leaning counties did not. Thus, the campaign claims, absentee ballots cast in Biden-friendly Philadelphia were more likely to be counted than ballots cast in more Trump-friendly regions of the state — and this discrepancy amounts to unconstitutional discrimination.

But the campaign seeks an extreme remedy for this alleged violation: It asked Judge Brann to forbid the state from certifying the results of its 2020 election. Because some small number of Trump voters allegedly had a harder time voting than some Biden voters, the Trump campaign effectively asks Brann to disenfranchise the entire state of Pennsylvania —something Brann explicitly refuses to do.

As Brann writes, “Prohibiting certification of the election results would not reinstate the Individual Plaintiffs’ right to vote. It would simply deny more than 6.8 million people their right to vote.”

If the Trump campaign were correct that Pennsylvania violated the Constitution by only notifying some voters of the need to cure errors in their absentee ballots, then the proper remedy is to give all voters who needed to cure their ballots an opportunity to do so. It’s not to disenfranchise millions. “The answer to invalidated ballots,” Brann writes, “is not to invalidate millions more.”

Judicial opinions are typically staid documents that avoid direct criticism of legal advocates — both as a professional courtesy and because judges typically want to avoid giving the impression that their disregard for a particular lawyer may have influenced their decision. But Judge Brann clearly believes that Trump’s lawyers behaved egregiously in his courtroom, and that this conduct is worth noting repeatedly in his opinion.

Early in his opinion, Brann summarizes the lawsuit in ten damning words: “Plaintiffs ask this Court to disenfranchise almost seven million voters.” The mere fact that Trump’s lawyers would even request such as thing is audacious. As Brann notes, “this Court has been unable to find any case in which a plaintiff has sought such a drastic remedy in the contest of an election, in terms of the sheer volume of votes asked to be invalidated.”

And yet, Trump’s lawyers did not come to court with any evidence or legal authorities that could justify such a result. “One might expect that when seeking such a startling outcome, a plaintiff would come formidably armed with compelling legal arguments and factual proof of rampant corruption,” Brann writes. But “that has not happened. Instead, this Court has been presented with strained legal arguments without merit and speculative accusations, unpled in the operative complaint and unsupported by evidence.”

Brann also spends an entire section of his opinion describing the game of musical chairs that Trump’s lawyers appeared to play while they were actively litigating the Boockvar case. “Plaintiffs have made multiple attempts at amending the pleadings, and have had attorneys both appear and withdraw in a matter of seventy-two hours,” he writes. On the eve of oral argument, Trump attempted to replace his entire legal team. Giuliani was added to the team on the same day as the hearing where the former New York City mayor appeared unfamiliar with basic aspects of the case.

At other points in his opinion, Brann calls out the Trump legal team’s inability to explain essential parts of their legal argument. In order to bring a case in federal court, for example, a plaintiff must show that they were injured in some way by the defendant — a requirement known as “standing.” Yet, as Brann writes, “the standing inquiry as to the Trump Campaign is particularly nebulous because neither in the [campaign’s amended complaint] nor in its briefing does the Trump Campaign clearly assert what its alleged injury is.”

That led Judge Brann to “embark on an extensive project of examining almost every case cited to by Plaintiffs to piece together the theory of standing as to this Plaintiff – the Trump Campaign.”

Thus, despite the harsh rhetoric in his opinion, Brann was extraordinarily generous to the Trump campaign and its lawyers. Rather than simply taking the incompetent arguments that were presented to him and rejecting them out of hand, the judge took the time to construct a coherent version of Trump’s arguments — and then he rejected that better version.

I could continue to beat this horse, but it’s already dead. Election law professor Rick Hasen said of Giuliani’s appearance in Brann’s courtroom, “I’ve never seen worse lawyering in an election law case in my life.” And Brann’s opinion makes it clear just how bad the Trump campaign’s lawyering was.

Georgia Sen. Kelly Loeffler has tested positive for the coronavirus

US hospitals are beginning to be overwhelmed amid record coronavirus cases