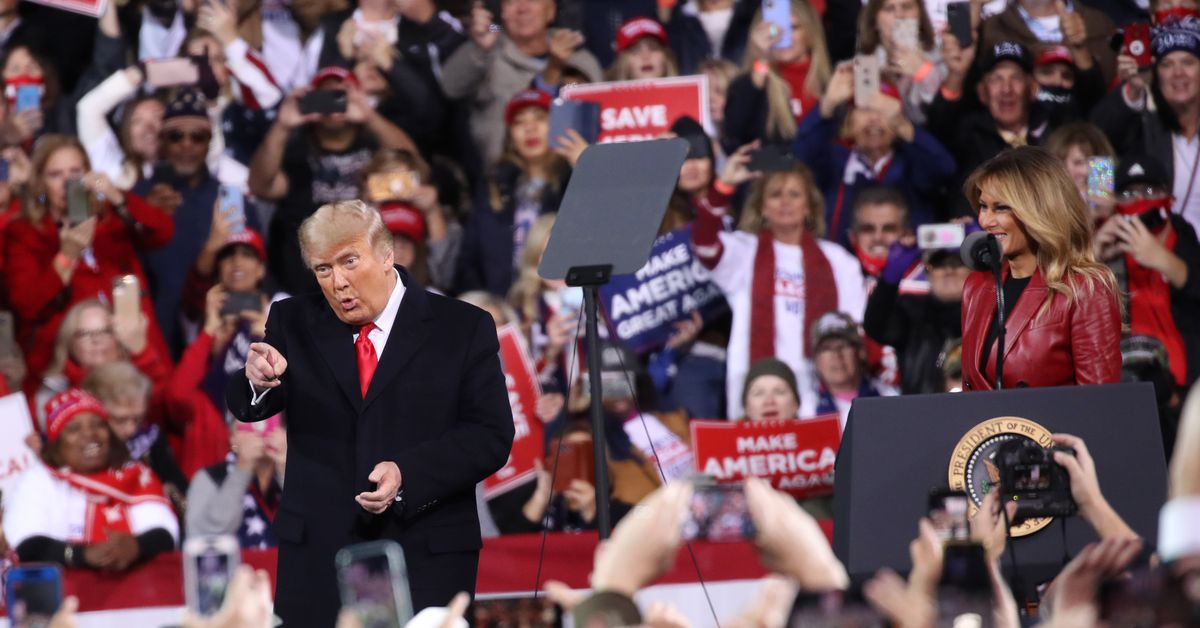 Outgoing President Donald Trump traveled to Valdosta, Georgia on Saturday for a rally that was ostensibly meant to pump up voters and encourage them to support Republican Sens. Kelly Loeffler and David Perdue ahead of next month’s runoff elections. But, perhaps unsurprisingly, Trump ended up having a hard time talking about anything but himself and his grievances.

Trump’s trip to Georgia for his first post-election rally came as he continues to push lies about the election being stolen from him — and as he makes a last-ditch push for Republican legislatures to overturn the election results. Much of Trump’s remarks consisted of variations on these themes, and his insistence that the election was rigged against him in states he lost like Georgia was at tension with the idea it’s important for Republicans to turn out for Loeffler and Perdue.

That incoherency was evident throughout Trump’s speech on Saturday, which began with him brazenly lying that he actually won Georgia.

“We won Georgia, just so you understand,” Trump said, even though his loss in the state has already been certified by Georgia election officials. Trump ended up repeating this lie so many times throughout his speech that by the end of it he was mentioning it in passing as if it’s settled fact.

Trump has repeated his lie about winning Georgia so many times during this rally that he’s now mentioning it in passing like it’s a settled truth pic.twitter.com/Ql4Rm2ipFk

Despite his insistence that the Georgia Republicans who run the state at best looked the other way while Democrats conspired to steal the election from him, Trump at other points urged his fans to go out and vote for Loeffler and Purdue, saying things like, “if you don’t vote, the socialists and communists win.”

But what the president didn’t bother trying to explain is why Republican voters should have any confidence the runoffs won’t be rigged just like he says the presidential election was, given that they will be run by the same officials.

Trump incoherently rants about the Georgia election being rigged against him while encouraging Georgia Republicans to go vote in the Senate runoffs next month pic.twitter.com/nJorjwE0yB

Both Georgia senators are in tight races, and the slim margin by which Trump lost the state would make it seem that even a slightly depressed turnout could cost Loeffler and Perdue their seats come January. And should they both lose, Democrats will regain control of the Senate thanks to the tiebreaking vote of Vice President-elect Kamala Harris. Republicans were counting on the president to help provide both candidates with some momentum.

But the downside of Trump’s difficulty talking about anything other than himself or the alleged terribleness of other people become evident when Loeffler and Perdue took the stage to tepid applause. Their brief remarks were truncated by “fight for Trump!” chants that drowned them out.

The Georgia rally came hours after Trump reportedly phoned Georgia Gov. Brian Kemp (R) and asked him to convene a special session of the legislature to overturn the election results. Kemp reportedly turned Trump down, and perhaps as a result, Trump attacked him a number of times throughout his speech, at one point telling his fans “your governor should be ashamed of himself.”

Then, toward the end of the rally, Trump outlined the desperate two-front battle he’s trying to fight to overturn the election, saying “hopefully our legislatures and the United States Supreme Court will step forward and save our country.”

But since neither Republican-controlled state legislatures or the Supreme Court has thus far shown much inclination to get involved in an election President-elect Joe Biden clearly won, Trump appears to have a backup plan — one he expressed in a fittingly incoherent manner.

Unfortunately for Trump, there’s no do-overs. But in the meantime, his refusal to concede has led to a fundraising bonanza that could end up helping him launch a bid to avenge his loss to Biden based on the “they stole it from me” lies he’s been pushing over the month since Election Day.