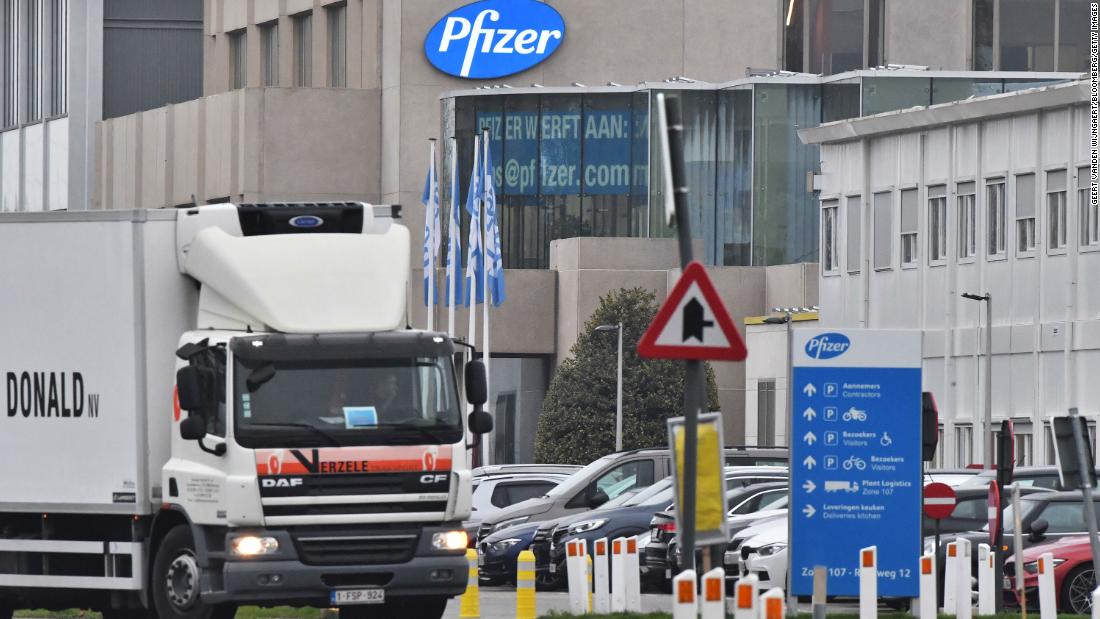 Vaccinations are set to begin on Tuesday in England, Wales and Scotland. Northern Ireland said it would start administering the vaccine early in the week but did not specify which day.

The process, which is complicated by the need to store the Pfizer/BioNTech vaccine under strict conditions and give each recipient two doses, three weeks apart, will be closely watched from around the world.

Saffron Cordery, deputy chief executive of NHS Providers, told Sky News on Sunday that 50 hospital hubs across England had already received their allocation of the vaccine, and that the distribution of the vaccine was “really well underway now.”

UK health officials expect to have up to 4 million doses of the Pfizer/BioNTech vaccine, which offers up to 95% protection against Covid-19, available by the end of December, Cordery said.

The government has ordered 40 million doses of the Pfizer/BioNTech vaccine so far, enough to vaccinate 20 million people, or a third of the UK population. More deaths from Covid-19 have been recorded in the UK than anywhere else in Europe.

The speed with which UK regulators approved the vaccine — ahead of their counterparts elsewhere in Europe and in the United States — raised questions in some quarters. But Cordery said the process had been “incredibly robust.”

“Yes, it has been shorter than other vaccine approval processes, but that’s because everything all has been thrown at this all in one go,” she said.

The head of the UK medicines regulator also put out assurances on Sunday, saying the Pfizer/BioNTech jab is “as safe as any general vaccine” and that those receiving it would be monitored by health officials.

“You might have a mild symptom but it will probably disappear in a day or two, and nothing at all of a serious nature,” June Raine, head of the UK’s Medicines and Healthcare products Regulatory Agency (MHRA), told the BBC.

According to the MHRA, more than one in 10 recipients may suffer side effects including pain at the injection site, headache, muscle pain, chills, joint pain and fever. A handful of other, less common, side effects are also listed.
Asked about the potential impact of Brexit on the vaccination program, Raine said: “We’ve practiced, we are ready and we are fully prepared for any possible outcome.”
The transition period for the UK’s exit from the European Union comes to an end on December 31. Last-ditch talks between EU and UK leaders on a trade deal continued over the weekend, amid dire warnings over the economic and logistic chaos that would result from a hard crash out of the world’s largest trading bloc.

“Our goal at the HMRA is to make sure that whatever the outcome, whatever the deal, medicines, medical devices, and vaccines reach everyone in all parts of the country in the same way without any interruption at all,” Raine said.

The first doses of the vaccine reportedly arrived in the UK on Thursday night, carried by a fleet of unmarked trucks through the Eurotunnel from Belgium to undisclosed storage facilities in England, Wales, Scotland, and Northern Ireland, according to CNN affiliate ITV News.

The UK government’s announcement of its approval a day earlier had been followed by confusion over who would get the vaccine first and how it could be administered safely, given the logistical constraints.

The vaccine must be stored at minus 70 degrees Celsius, a temperature only possible in special freezers. Once taken out of the freezer, the MHRA authorization requires the doses to be kept refrigerated and used within 5 days. Batches can only be moved and repacked into smaller numbers of doses a limited number of times and under strict conditions. Once a vial is diluted for injection, it cannot be transported and must be used within six hours, or discarded.

The UK’s Joint Committee on Vaccination and Immunisation (JCVI) recommended vaccinating residents of care homes for older adults and their staff first, followed by people aged over 80 as well as health and care workers.

But the challenges involved in getting the vaccine to care home residents means health workers now plan to administer it first to people aged over 80 who are about to be discharged from hospital, or are attending out-patient hospital appointments.

“Hospitals will also begin inviting over 80s in for a jab and work with care home providers to book their staff in to vaccination clinics,” a statement from NHS England said Sunday. “Any appointments not used for these groups will be used for healthcare workers who are at highest risk of serious illness from Covid.”

Raine told the BBC the exact timing might be “variable” but that she expected to see the vaccine reach care homes “definitely within the next two weeks.”

Northern Ireland’s Health Ministry said Friday an initial consignment of almost 25,000 doses had arrived, paving the way for “vaccinations to commence from early next week, starting with vaccinator teams.”

Scotland is set to receive 65,000 doses of the Pfizer/BioNTech vaccine from the initial batch of 800,000 doses distributed in the UK, Secretary of State for Scotland Alister Jack said in an op-ed for the Mail on Sunday.

He added that the Armed Forces were involved in the planning and logistics of the vaccination program.

Scottish Health Secretary Jeane Freeman said those giving the vaccinations would be the first to receive it, followed by care home residents and staff, then all those 80 years of age and over and front line health and social care workers.

She acknowledged the challenges around transporting the vaccine to care homes and individual residences, but added: “For all the difficulties that lie ahead, it should give us all real hope that the end of the pandemic is in sight.”

Other nations are not far behind the UK when it comes to taking a decision on approving the vaccine.

The US regulator, the Food and Drug Administration (FDA), has scheduled a meeting of its vaccine advisory committee December 10 to discuss Pfizer/BioNTech’s emergency authorization application. It will meet again on December 17 to consider the application for Moderna’s vaccine candidate.

Dr. Anthony Fauci, America’s top infectious disease expert, apologized Thursday after suggesting a day earlier that UK regulators had not scrutinized the data on the Pfizer/BioNTech vaccine as carefully as their US counterparts.

News of the approval of the Pfizer/BioNTech vaccine was welcomed by many Britons as a ray of light at the end of a dark year.

There are hopes that UK approval could soon follow for Moderna and the vaccine candidate developed by British-Swedish drugmaker AstraZeneca and Oxford University.

But the four chief medical officers for the United Kingdom warned in a letter that this winter would still be “especially hard” and that people must not let down their guard against the virus.

“Although the very welcome news about vaccines means that we can look forward to 2021 with greater optimism, vaccine deployment will have only a marginal impact in reducing numbers coming into the health service with Covid over the next three months,” they said.

Meanwhile, vaccination centers across Moscow started to distribute Russia’s Sputnik V Covid-19 vaccine on Saturday, initially to groups such as teachers, health professionals, and municipal services workers.
Russian President Vladimir Putin has ordered large-scale vaccination with Sputnik V to begin across the country from this week.

Russia became the first country in the world to approve its coronavirus vaccine in August, authorizing the treatment for public use even before crucial Phase 3 trials — which are still underway — were conducted. The move drew criticism from scientific circles.

Kuzenkova shrugged off questions about vaccine safety. “If there is a question between getting sick or getting a vaccine … this is a very dangerous disease which leads to quite serious consequences. So the answer is obvious here,” she said.

“The vaccine has officially been registered. Two stages of clinical trials have passed and we are now completing the third stage. Therefore, within the framework of a pandemic, in these conditions, this does not at all contradict any regulatory norms,” she added.

Mayor of Moscow Sergei Sobyanin suggested early participation was enthusiastic, saying more than 5,000 people had registered for vaccination in the first five hours.

One of those getting vaccinated Saturday told CNN she was “not at this point” afraid of having the vaccine before trials are over.

“Well, of course there are some concerns. But I try not to think about it,” said the woman, who works as an administrator at the hospital and identified herself only as Nadezhda. “I wanted to get immunity from the new Covid-19 infection. Protect myself and my family. In order not to get sick, not to get complications, not to infect my loved ones.”

Officials say there are enough doses for more than 2 million people across Russia, which has a population of about 145 million.